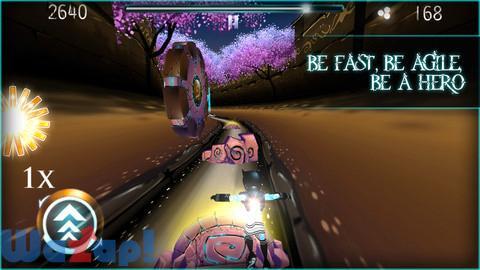 "This endless runner is a total breath of fresh air" ― Arcade SushiThe chase is on to save the realm of gods.The realm of the gods has been thrown into disarray and it’s up to one swift night spirit to restore the peace. Steer the young hero Nito as he sprints into action, collecting dream orbs that send him accelerating around obstacles and leaping over pitfalls. Explore a world unlike anything you’ve seen before and immerse yourself in this unique action-packed, story-driven runner.QUICK ON YOUR FEETSet out on an epic quest to restore the Tower of Dreams following its collapse and restore the escaped Gemini Spirits. Experience a tale brought to life through imaginative art style and a cast of compelling characters.NEED A HEROYoung and agile, Nito can run but he’ll need your help to reach his full potential. Dash through strings of dream orbs to boost even faster and use tilt controls to avoid obstacles that threaten to bring Nito’s journey to an abrupt end.JUST RUN WITH ITTake a break from saving a troubled realm and just run. Upgrade Nito with power-ups, costumes and breeze through checkpoints in Endless mode. GAME FEATURESA story-driven runner with over 26 missionsTilt your device to steer Nito left and rightAn epic adventure in 3D with an epic soundtrackRun as fast as you can in Endless ModeUNIVERSAL: Works on iPhone, iPod touch and iPad
Wazap!最新ユーザーアクション
もっとみる